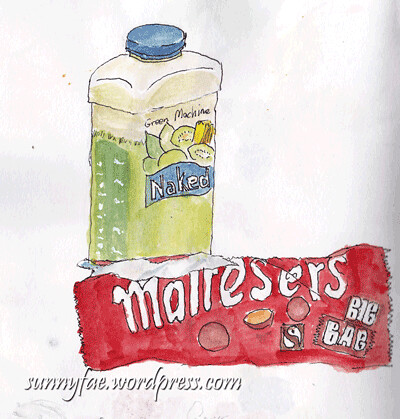 Hi there, how are you?

This week we spent a few days in London. We have family there and we often go for a week or so. We had a good time and managed to fit quite a few things in.

The train journey can be a bit dull so we occupied ourselves with music and drew in our sketchbooks. I decided to draw what was directly in front of me, my drink and a half eaten packet of Maltesers, I would have drawn my sandwiches too but I had already eaten them.

We visited the Tate modern. There is a really good exhibition of Georgia O’Keeffe paintings. It’s well worth the money to see her amazing art work. I also saw the Wifredo Lam exhibition. He was a Cuban artist who made some strange but interesting art . 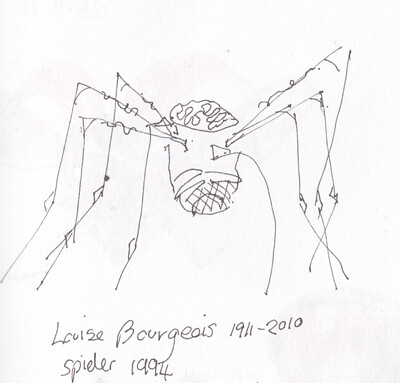 We had a good look around the rest of the Tate, the one piece that stood out most to me was a large seven or eight foot bronze spider. I did a little sketch of it in my sketchbook with a micron pen, I find I remember things better when I draw them.

The view from the Tate Modern viewing platform.

At the top of the Tate is a viewing platform. You can see right out across London in all directions. This was a panorama picture I took on my iPod from one side of the building.

We also visited the V&A museum. We had heard the robot in the garden would actually be working and we wanted to see it in motion. (I’d seen it before but that time it wasn’t working) It collected data about the people moving around in the garden. Where they stood, their speed and motion, how many were there etc… It then translated the information into weaving large carbon hexagonal shapes which were hung and displayed in the garden

Next day we went back to the V&A at night to hear a piece of music composed by Dimitrios Skylas called abyss based on some ceramic casts from Spode factory moulds. Just before leaving we noticed the robot had been beautifully lit up, so I took a few snaps on the way out.

Of course there was shopping and eating out because, well London right? You have to do these thing properly don’t you hehe. We’re back now and I think I need a week to slow down and relax from our little weekend getaway.

Thanks for stopping by. Till next time, have fun x 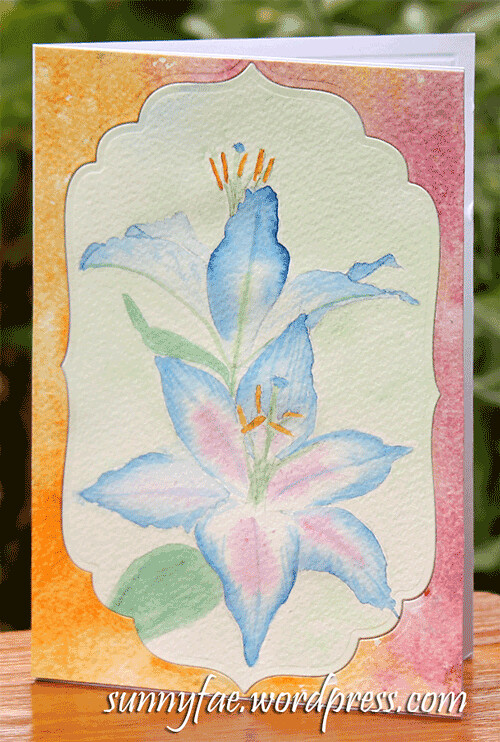 Hello, how are you?

It was our wedding anniversary this week and my lovely other half bought me some lilies. They’re beautiful, blue (probably dyed) and the buds are nearly all opened now. The sad news was that after two days of them being in the house his eyes were streaming and he couldn’t breath! They had triggered a fierce bout of hay fever. Guess who won’t ever be getting any more lilies?

To make the most of them I’ve been taking lots of photo’s  as they open and keeping them well out of my poor other half’s way as much as I can.

I made an attempt at doing a watercolour, just to see if I could. It’s not brilliant but it did make quite a nice birthday card. It’s painted onto watercolour paper and some how dropped the paint brush on the paper so I die-cut it to get rid of the splodges.

It looked a bit washed out when I held it against the card so I cut the same shape out of the centre of a failed watercolour experiment left over from watercolour class to use as a frame. I liked the contrasting colour and it evened out the front of the card. 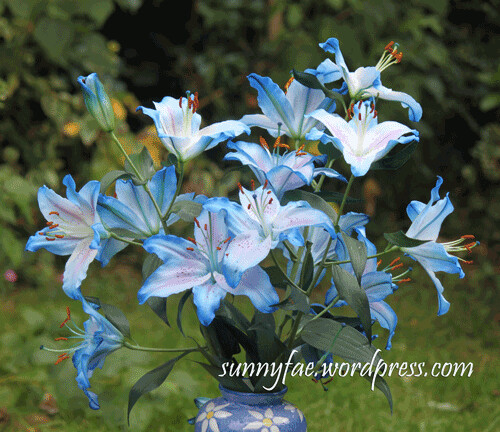 This is a photograph I took of the offending lilies. They really are beautiful but I think he will be sticking to less pollinated flowers in future.

Thanks for stopping by. Till next time, have fun x

A few days rest and relaxation. We are all getting some culture at the V&A museum. There’s so much to look at in here, it takes more than one day to see everything.

I’m sending this on my iPod  because we don’t have wifi. Thank you free wifi 😀 hopefully this will work.

Thanks for stopping by, till next time, have fun x 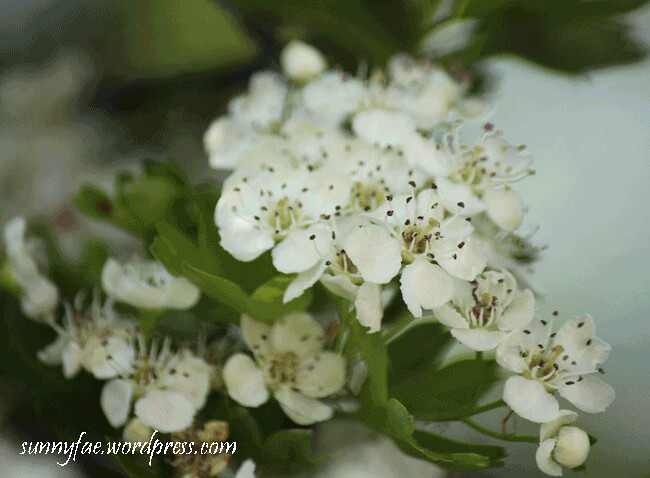 In my quest to learn to draw I’ve been taking lots of photos of blossom. All kinds of blossom, quince, cherry, apple. I love it all. I saw a hawthorn tree and off I went to photograph it.

It wasn’t until I looked back at the pictures that I realised (here’s the science bit) the anthers on the filaments were pink and not black like in the photo above. (thank you google) 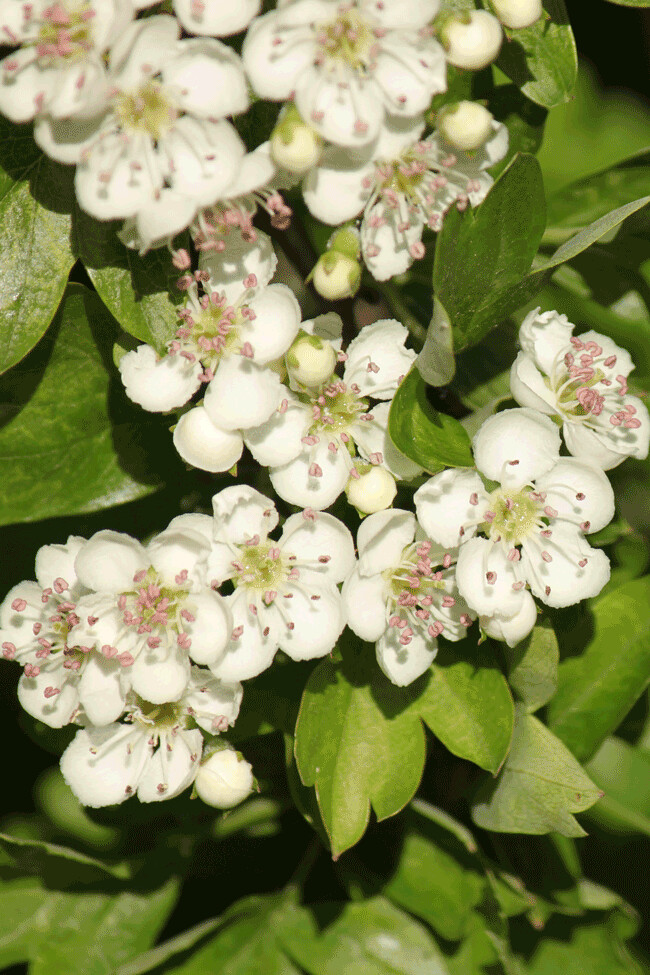 I went back to the tree and had another look. They do start off pink and the pollen is inside the tiny pink sacks. They burst open and the pollen folds out onto the anther then as the flower is pollinated they turn black.
Seems I always get to them after pollination has taken place, plus like every one else I wander through life oblivious to the wonders of the world we live in. 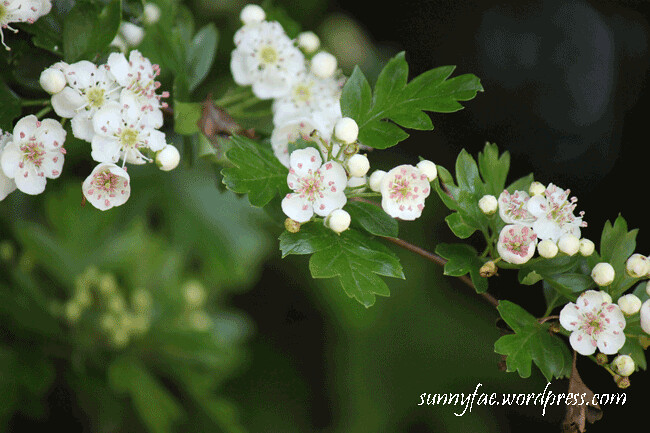 Turns out learning to draw is not only fun but educational too. Who new?

Thanks for dropping by. Till next time, have fun x

Happy Mothers Day. Hope every one’s having a lovely day. 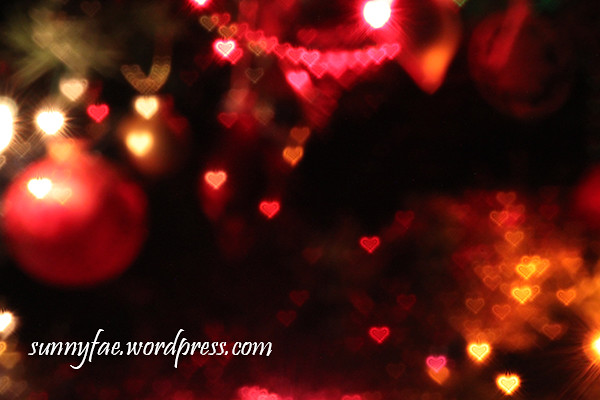 Hi There. How are you? Some photo’s today, lots of them (just to warn every one).

Christmas 2015 I tried and succeeded in taking a few bokeh style photos. I also managed to take a few outside in the garden during spring using raindrops. Their not fancy, just blurry lights but I enjoyed taking them.

After seeing some tutorials on the internet I thought I’d give it another go. This time I wanted shaped blurs and the tutorials all say to make a lens cover.

The lens cover is a circle of black card with a

tiny shape punched into the middle of it. The punch was really tiny so I cut the shape out fo a small piece of card and taped it into a hole in the middle of the bigger one.

It has two tabs, one each side so I can attach it to the camera with an elastic band. (I don’t want to damage my camera doing this) The cut-out shape needs to go into the centre of the lens cover otherwise the bokeh shape distorts. (It’s functional not beautiful but it works.)

Out of the photo’s I have taken the top five were the prettiest. The lower ones are a little different, maybe more cartoony but I like the way they turned out. 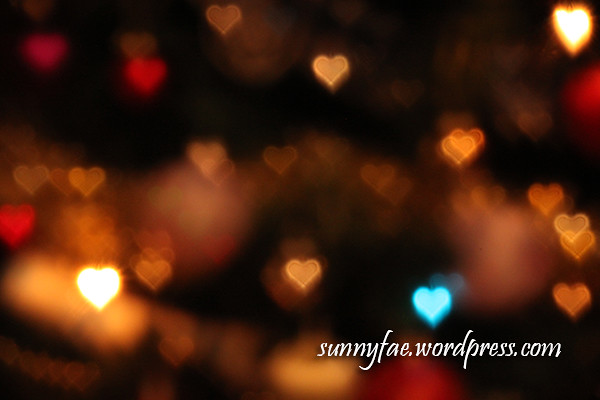 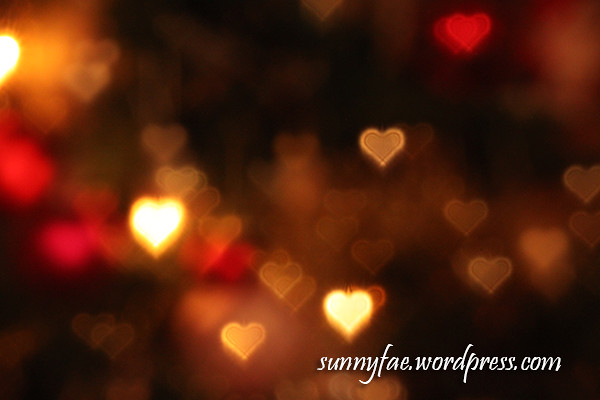 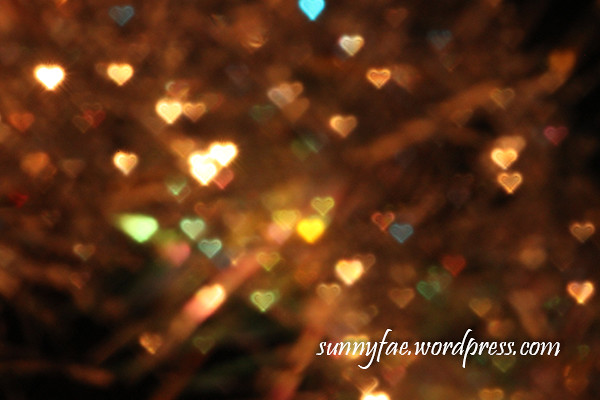 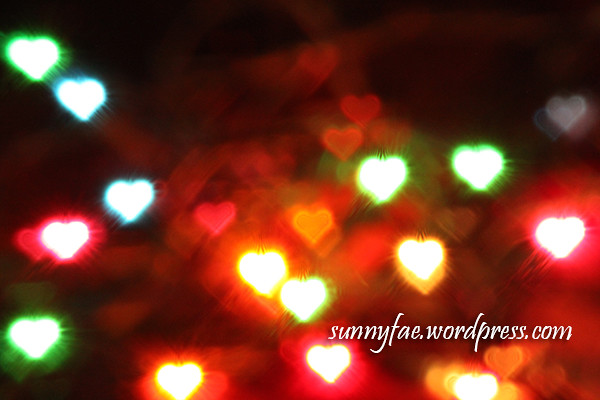 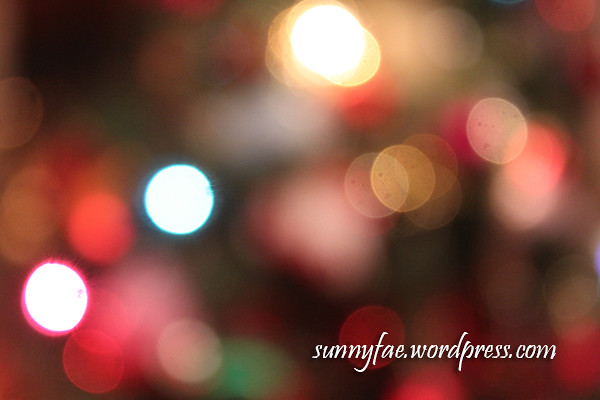 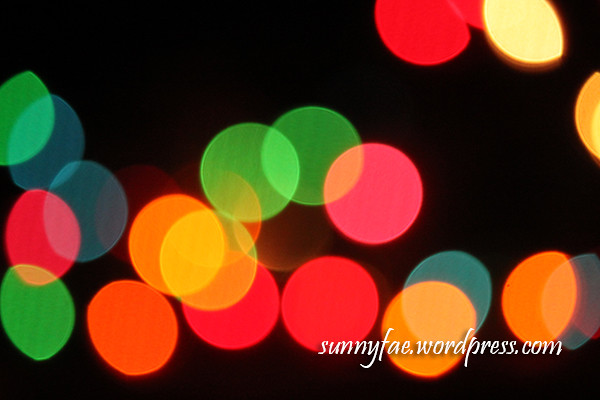 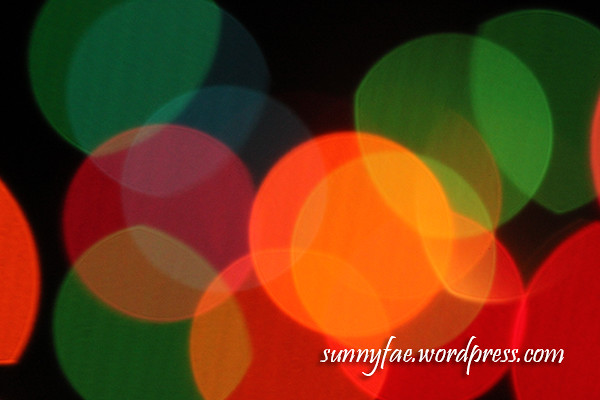 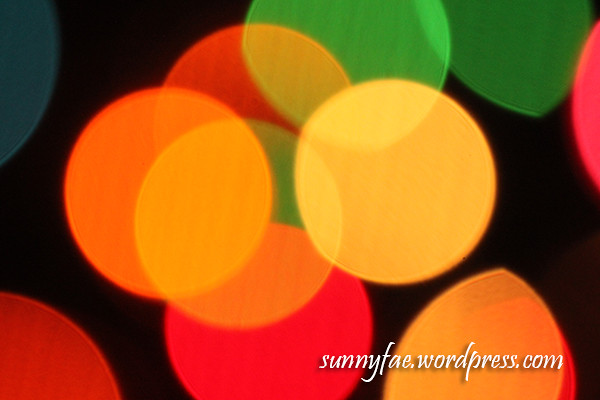 That’s it from me today, thanks for taking the time and stopping by. Till next time, have fun x

Hi there.
It’s official, it’s Autumn the leaves are changing colour and the Japonica Quince are ready. 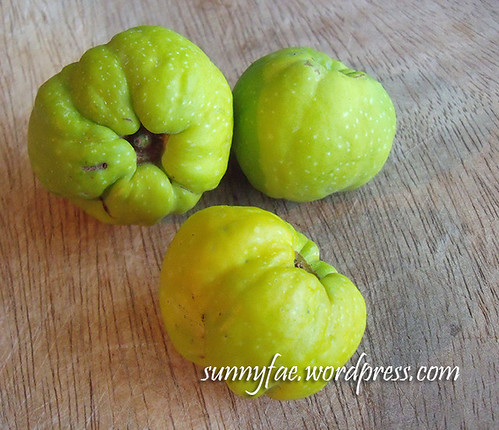 Last time I showed you the quince growing in my garden. It’s still there, I’m still waiting.

On the bush at the other side on my little patch is a Japonica quince. They’re not like the normal pear shaped quince, they are small and nobly about 1 ½ – 2 ½ inches. They ripen October (ish) once they have turned yellow. (mine are a little underdone, I picked them because they were needed to make up the weight)

I’m really happy because normally I get flowers. Lots and lots of lovely flowers but no fruit. This year however, hidden amongst the branches were these three little beauties. Admittedly they are on the smaller side more like 1-1 ½ inches and I wont be making much with them. I’m just really pleased to get any a all!

I have yet another type of Japonica Quince, the fruits are about twice the size of these but they have decided not to have fruit yet, if ever!

If I could buy these gorgeous fruits in the shops I would, but I can’t so thanks to my very generous mum who gave me the plants I can try to grow my own.

Thanks for checking in to read my little ramblins. till next time (when I’ll tell you what I did with my three quince). Have fun x 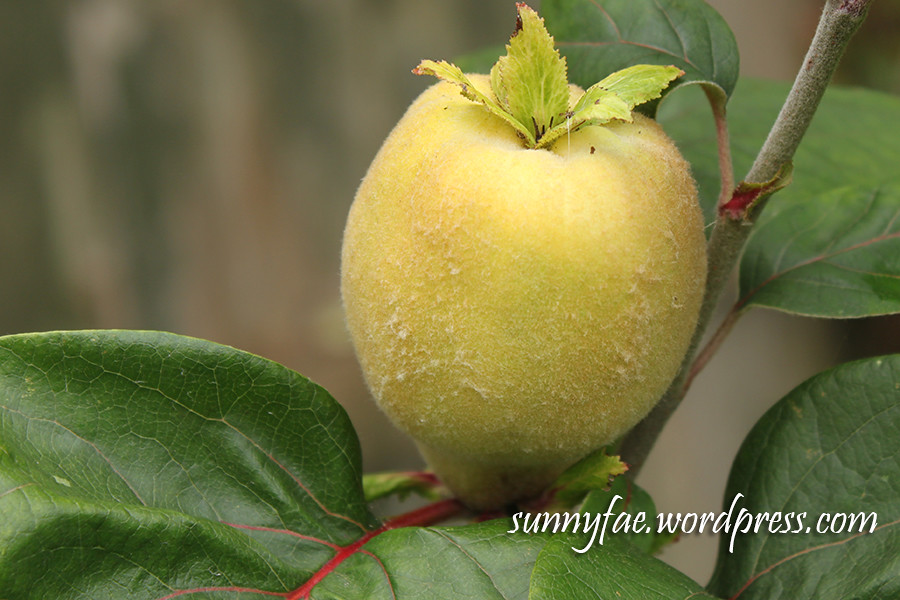 Hay there.
I love quince.
They can’t be eaten raw like other fruit. They are very hard with an astringent, acidulous taste. They need to be cooked to make them palatable. Mainly I make them into jam or jellies. You can also bake or roast them, either way they are delicious.

A few years ago I bought a quince tree. It was very young, almost a twig really. I wasn’t sure what type of quince it was, gardening is not something I do well. I just knew I wanted to grow some in my garden. It grew a little taller but no flowers and no fruit.

Last year a single flower appeared but again no fruit. This year there were at least half a dozen flowers and then two fruits, whoot! One dropped off almost straight away. This is my one and only quince. It’s a little smaller than my fist, fluffy and waiting.

I think they’re supposed to be ready by the end of October, so I wait and I watch. They taste so good I know the wait will be worth it.

To anyone stopping by to read my ramblings, thanks.
Till next time, have fun x